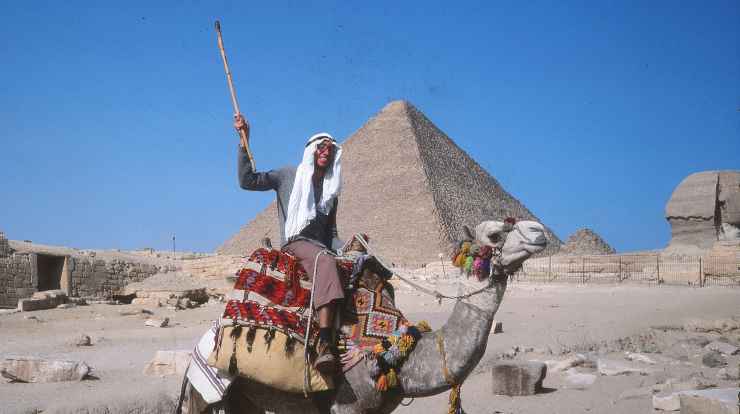 Yes, that’s me. On a camel. Right beside the Pyramids. The camel’s name was California, which I reckon that was a sop to wealthy American tourists. I was only one of those last three terms; a tourist.

I’d reached Giza and the Pyramids the long way; via Kenya then overland through Uganda, Sudan and up through Egypt following the Nile. That in itself is a long story, (possibly even a book), and I could write a whole chapter on how I came to be atop California due to my exceptional (read “accidental”) bartering skills. But that’s not the point of this post. The point it is to tell you how I ended up in Africa in the first place.

Except I will say this: if you have a bucket list, the Pyramids should be near the top of it. I mean it. Seriously. Nothing can quite prepare you for these monstrosities. They are, quite literally, mountains of stone. Here’s what I mean …

Anyway, how did I get from a shitty, cold, London winter selling cameras on Tottenham Court Road for a pittance, to Africa — where living on a pittance means you can live like a … well, not a king exactly, but a minor Royal, at least?

I won a writing competition. (Yes, writing’s always been something of a lifesaver.)

At the time, I was sharing a Council flat in Brixton with possibly the world’s oddest flatmate. (There’s another chapter there. I knew him as “Mike” but he turned out to be a fairly senior follower of Bhagwan Shree Rajneesh. Mike apparently considered the shopping I put in the fridge to be gifts from his spiritual leader and just helped himself. So I ended up keeping the stuff in my room. It was bloody cold enough!)

London, mid-February. You go to work in the dark and come home in the dark, and for some bloody spiritual Rajneesh reason the poxy heating’s off again!

I clearly remember curling up with a Sunday Times colour supplement one evening, a sleeping bag around my shoulders, and reading about The Best Things in Life competition being run by the publishing house Mitchell Beazley. “Describe some of the best things in your life in 100 words or less and win £2,000″ it said.

The Best Things in Life

Obsequious, yes, but I’d certainly brook
a comfortable chair and a jolly good book.
Paramount to the pleasure is placement of chair,
and with £2,000 that could be anywhere.
But the bliss, rest assured, becomes much the greater
the closer the chair moves towards the Equator.
Book’s title is vital, lest we forget,
those left at home in the cold and the wet;
Bleak House in a bronzing Bermudean balm,
or the glare of the tropics and Cold Comfort Farm.
You may think me sadistic, but perhaps you forgot,
At the moment I’m freezing and long to feel hot.

I won. The cheque was presented at a posh lunch at The Savoy (another chapter there!), and shortly afterwards I told Ratbag Cameras (not their real name) where to shove their job and headed south.