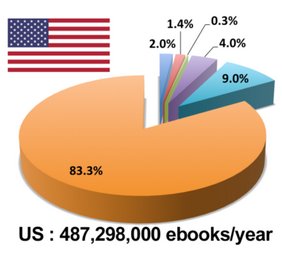 Last year, New Zealanders purchased 5.3 million printed books — not bad for a country of just 4.6 million people, but a long way behind Australia. While Kiwis purchased an average of 1.3 print books per person, the Aussie average was 2.3. (24.5 million people bought 56.4 million books.)

Where the figures get really interesting is in the number of ebooks sold. Almost every Aussie also bought an ebook each last year: 22.4 million sold, or the equivalent of 28% of total book sales. Ebook sales for New Zealand are harder to measure because we have no country-specific Amazon store so most of our purchases go through either amazon.com (the US) or amazon.com.au (Australia). Still, even without figures from Amazon, Apple and Kobo sold 1.3 million ebooks here in 2016 — which makes up around 20% of total book sales. Given Amazon’s market penetration overseas, I suspect the real number of ebooks sold here is at least double that figure.

*(New Zealand ebook total only includes Apple & Kobo stores; Because Amazon has no country-specific store for New Zealand, Kindle ebooks are purchased in NZ through Amazon.com and thus included in the US total)

The figures above come from yet another brilliant Author Earnings survey, this time of the top five English-language countries the US, UK, Canada, Australia, and New Zealand.

As usual, there’s tons of fascinating data in the report for both writers and publishers. It’s all clearly illustrated and presented from a non-partisan perspective, but one graph in particular caught my eye:

That represents a wildly dramatic shift in fortune for non-Big Five traditional publishers; three years ago, their combined $ ebook sales were less than half of what the Big Five’s were.

A detailed breakdown of precisely who those “small or medium publishers” really are is promised in a future report.