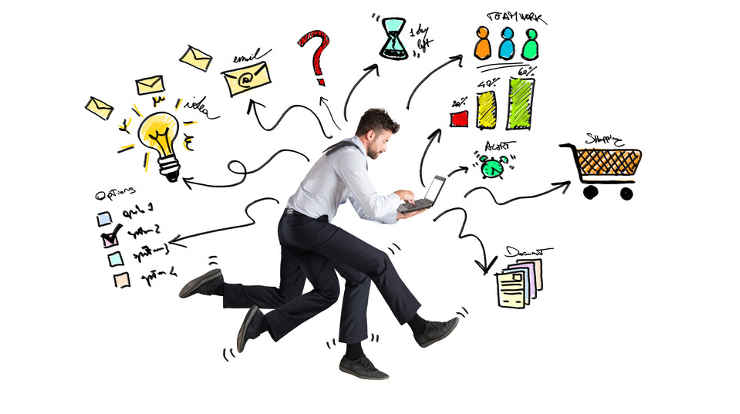 Just yesterday I wanted to catch up on some tech reading. After work hours seemed perfect, so I settled down with a glass of wine and the work laptop … and two minutes later a ‘new message’ alert flashed in the bottom right-hand corner of the screen. Nothing urgent, a simple query, and one that could be answered in less than a minute. Done. No, not quite. The messaging app, Teams, Microsoft’s corporate version of Facebook’s Messenger, showed the sender was typing a reply. So I waited. And waited. Then replied to the reply, received another message and replied to that. Finished, finally! I checked the clock. That “less than a minute” reply had taken almost ten.

Now, where was I?

I had to reread the previous page – and replenish my wine – just to get back into my former headspace.

I should have known better, of course. Research dating back as far as 1927 shows that human beings are rubbish at doing more than one or two things at once. Oh sure, we can all walk and chew gum at the same time, even hold a conversation too, but any real brain work – stuff that requires careful thought and concentration – requires focus. Each time you swap tasks on your computer your brain does a sort of mini reset, and while each reset may only take a fraction of a second, it can add up to a 40% loss of efficiency. And that’s just doing mundane office tasks, not ones that require particular focus and concentration.

Although switch costs may be relatively small, sometimes just a few tenths of a second per switch, they can add up to large amounts when people switch repeatedly back and forth between tasks. Thus, multitasking may seem efficient on the surface but may actually take more time in the end and involve more error … even brief mental blocks created by shifting between tasks can cost as much as 40 percent of someone’s productive time.

People who claim to be good at multitasking are often just fooling themselves. All they’re actually doing is several things at once, poorly.

Think about that next time your email program pings to say you’ve got a message, or you flip over to check Facebook, or send a quick text on your phone.

I used to think the solution was simple and blindingly obvious: Turn it off! Shut down your cellphone, or at least mute it and throw it in a drawer, close down email and messaging and the web browser and anything else superfluous, and simply focus on what you want to achieve. I know of one full-time writer who has a full-time writing PC with nothing on it but a word processor. To check on email or look at Wikipedia or catch up on the news, he has to get up, walk across his office and – here’s the important part – switch on his regular PC and wait for it to boot. (The machine shuts down automatically after five minutes of inactivity. It doesn’t hibernate or sit waiting in a quick-response suspended state; it powers off completely.) “It’s a hassle to fire it up, so I only use it once or twice a day at times I set aside for doing that stuff,” he says.

It’s a strategy I followed, at least roughly, in my years of freelancing, and to this day personal email and social media remain options I switch on and off throughout the day; they’re never ‘always on’. Same with apps on my phone.

But that was then. Returning to the corporate world after a long absence shows what a cacophony of distractions it has become. Hands up if you have more than a hundred unread emails that are not spam. (More than a thousand …?) Hands up if you depend on message filtering to at least sift out some of the chaff. Then there are the chatty apps like Teams and its browser-based equivalent where you can join multiple work-related groups and spend hours just keeping up with what people are saying. And if that’s not enough, you can add the apps to your phone and be ‘on’ 24/7.

That’s not to say multitasking isn’t stimulating. (I suspect it’s also addictive.) Being busy, busy, busy is a buzz. But in the long term it’s not good for your physical health, your mental health – or your productivity.

Back to that tech reading I was trying to catch up on at the start of this piece. I never got it finished and the following day spent a solid hour trying to figure out something that I later discovered was clearly explained in a few lines and a simple example a few pages on from where I was finally left off. If only I hadn’t been interrupted …