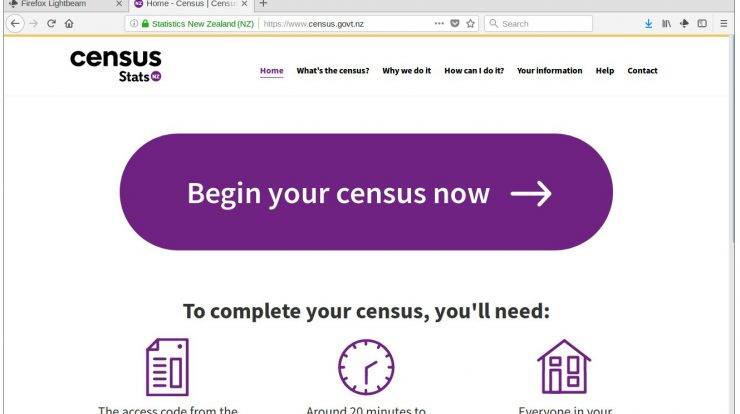 March 6 is census night here in New Zealand, and this morning Radio NZ reported that 1.7 million people have already completed their forms online. Time to do the same, I thought.

A few weeks ago I posted about the Lightbeam add-on which, you’ll recall, highlights all the third-party sites that the website you’re visiting connects to. I showed how a single visit to the news website Stuff secretly hooked me up to 69 other sites — many of them specialising in advertising and data collection. Web spies, in short.

Starting with an empty browser and a fresh instance of Lightbeam, I opened a new tab and visited www.census.govt.nz: Back in the Lightbeam tab however, I was surprised to find the site had made a dozen behind-the-scenes connections: The circle in the centre is the census site. The triangles connecting to it like a cluster of satellites are the third-party sites: 12 in all.

Moving the cursor over the triangles highlights each satellite’s address. Here I’ve zoomed in a little and animated all those connections:

Some are no doubt support sites providing things like fancy fonts, but what are googleads, adservice.google.com and two links to the notorious ad-serving company DoubleClick doing there? On a Government website (which doesn’t have any advertising), and a census website at that?

Slightly alarmed, I continued and clicked the button to begin my census. That took to the online census portal where I was asked to enter the access code I’d been sent in the mail: Once I’d done that, the Lightbeam tab showed three additions; the online portal,

which connected through Google Analytics to the main site,

and a new connection on the mothersite:

Entering my access code and beginning the actual census process added no new connections, but I was already a little disturbed by what I’d found. Why is New Zealand’s census connecting to local and foreign ad servers?

More to come this afternoon …