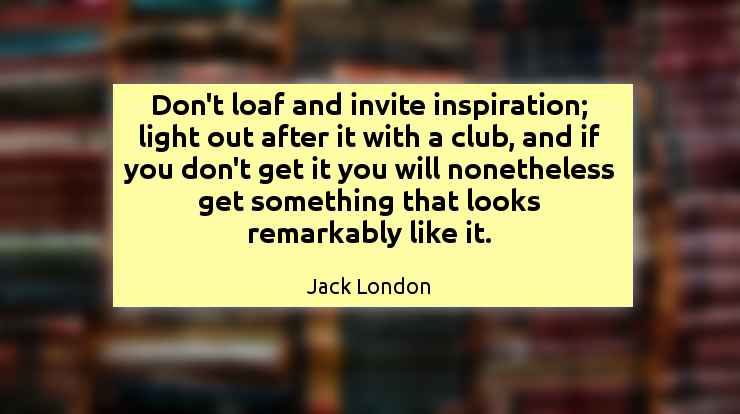 “Don’t loaf and invite inspiration; light out after it with a club, and if you don’t get it you will nonetheless get something that looks remarkably like it.”

Getting into Print, first published in 1903 in The Editor magazine. [source]

Jack London (born John Griffith Chaney) is best known these days for his novels The Call of the Wild and White Fang, both set during the Klondike Gold Rush. He wrote more than twenty other novels, dozens of short stories, non-fiction essays, plays and poetry, and was one of the first American writers to become a worldwide celebrity and earn a fortune from his work. He was also something of an innovator; one of the founders of a genre that would later come to be called science fiction.

In 1956, his literary executor, Irving Shepard, quoted a Jack London Credo in an introduction to a collection of London’s stories:

I would rather be ashes than dust!
I would rather that my spark should burn out in a brilliant blaze than it should be stifled by dry-rot.
I would rather be a superb meteor, every atom of me in magnificent glow, than a sleepy and permanent planet.
The function of man is to live, not to exist.
I shall not waste my days in trying to prolong them.
I shall use my time.