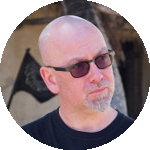 From Neil Cross’s excellent essay on the subject:

You’ve got to trust your own judgement – and during the first draft, all that judgement can really say is: okay, keep going. Right now, it’s not great. But it’ll turn out okay.

Which means the first job of the morning, almost every morning, is to drag your carcass to your desk and overcome a paralysing crisis of nerve.

Obviously that doesn’t include the days you take off because you’re having a paralysing crisis of nerve. But the trouble with those days is, they’ve got a tendency to fuse and merge into each other until months or years have passed and you wake up one morning wondering whatever happened to that novel you intended to write.

A book doesn’t pour out in an uncorrected gush of inspiration; it’s got to be sweated over, built up brick by brick – and sometimes what you’ve built up has to be knocked down with a sledgehammer.

Read the full piece here:
On the Nature of First Drafts