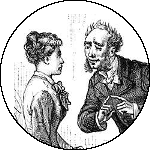 As Abraham Lincoln once said, “The problem with the internet is that you can’t always rely on it’s accuracy.”

The awful analogies below are widely attributed to quotes taken from high school essays by US teachers. They’re not! They were actually crafted with the express purpose of producing truly bad analogies. The original source is a 1999 Washington Post contest. Below you’ll find my Top 30—in no particular order—along with credit to the original (awful) authors.

1. He fell for her like his heart was a mob informant and she was the East River.
(Brian Broadus, Charlottesville)

2. Even in his last years, grandpappy had a mind like a steel trap, only one that had been left out so long, it had rusted shut.
(Sandra Hull, Arlington)

3. Shots rang out, as shots are wont to do.
(Jerry Pannullo, Kensington)

4. The plan was simple, like my brother-in-law Phil. But unlike Phil, this plan just might work.
(Malcolm Fleschner, Arlington)

5. The young fighter had a hungry look, the kind you get from not eating for a while.
(Malcolm Fleschner, Arlington)

6. “Oh, Jason, take me!” she panted, her breasts heaving like a college freshman on $1-a-beer night.
(Bonnie Speary Devore, Gaithersburg)

7. He was as lame as a duck. Not the metaphorical lame duck, either, but a real duck that was actually lame. Maybe from stepping on a land mine or something.
(John Kammer, Herndon)

8. Her artistic sense was exquisitely refined, like someone who can tell butter from I Can’t Believe It’s Not Butter.
(Barbara Collier, Garrett Park)

9. She had a deep, throaty, genuine laugh, like that sound a dog makes just before it throws up.
(Susan Reese, Arlington)

10.It came down the stairs looking very much like something no one had ever seen before.
(Marian Carlsson, Lexington, Va.)

11. The ballerina rose gracefully en pointe and extended one slender leg behind her, like a dog at a fire hydrant.
(Jennifer Hart, Arlington)

12. The revelation that his marriage of 30 years had disintegrated because of his wife’s infidelity came as a rude shock, like a surcharge at a formerly surcharge-free ATM.
(Paul J. Kocak, Syracuse)

13. The dandelion swayed in the gentle breeze like an oscillating electric fan set on medium.
(Ralph Scott, Washington)

14. It was an American tradition, like fathers chasing kids around with power tools.
(Brian Broadus, Charlottesville)

15. Her lips were red and full, like tubes of blood drawn by an inattentive phlebotomist.
(Greg Dobbins, Arlington)

16. The lamp just sat there, like an inanimate object.
(Nanci Phillips Sharp, Gaithersburg)

17. He was deeply in love. When she spoke, he thought he heard bells, as if she were a garbage truck backing up.
(Susan Reese, Arlington)

18. She was as easy as the TV Guide crossword.
(Tom Witte, Gaithersburg)

19. Her eyes were like limpid pools, only they had forgotten to put in any PH cleanser.
(Chuck Smith, Woodbridge)

20. She grew on him like she was a colony of E. Coli and he was room-temperature Canadian beef.
(Brian Broadus, Charlottesville)

21. Her pants fit her like a glove, well, maybe more like a mitten, actually.
(Chuck Smith, Woodbridge)

22. She walked into my office like a centipede with 98 missing legs.
(Jonathan Paul, Garrett Park)

23. It hurt the way your tongue hurts after you accidentally staple it to the wall.
(Brian Broadus, Charlottesville)

24. Her voice had that tense, grating quality, like a first-generation thermal paper fax machine that needed a band tightened.
(Sue Lin Chong, Washington)

25. Outside the little snow-covered cabin, a large pile of firewood was stacked like Pamela Anderson.
(Meg Sullivan, Potomac)

26. A branch fell from the tree like a trunk falling off an elephant.
(Jonathan Paul, Garrett Park)

27. The sardines were packed as tight as the coach section of a 747.
(Tom Witte, Gaithersburg)

29. He regarded death with hesitant dread, as if he were a commedia dell’arte troupe and death was an audience of pipe-fitters.
(Brian Broadus, Charlottesville)

30. Her eyes were shining like two marbles that someone dropped in mucus and then held up to catch the light.
(Barbara Collier, Garrett Park)