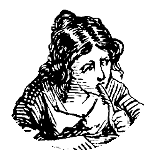 …I have this one nasty habit. Makes me hard to live with. I write…
Robert A. Heinlein

If you would not be forgotten as soon as you’re gone, either write things worth reading or do things worth writing.
Benjamin Franklin

One of the symptoms of an approaching nervous breakdown is the belief that one’s work is terribly important.
Bertrand Russell

Some editors are failed writers, but so are most writers.
T. S. Eliot

The difference between fiction and reality? Fiction has to make sense.
Tom Clancy
(paraphrasing Mark Twain)

A great many people think they are thinking when they are acutally rearranging their prejudices.
William James

A witty saying proves nothing.
Voltaire

Most people would sooner die than think; in fact, they do so.
Bertrand Russell

I love deadlines. I love the whooshing noise they make as they go by.
Douglas Adams

The reason I talk to myself is because I’m the only one whose answers I accept.
George Carlin