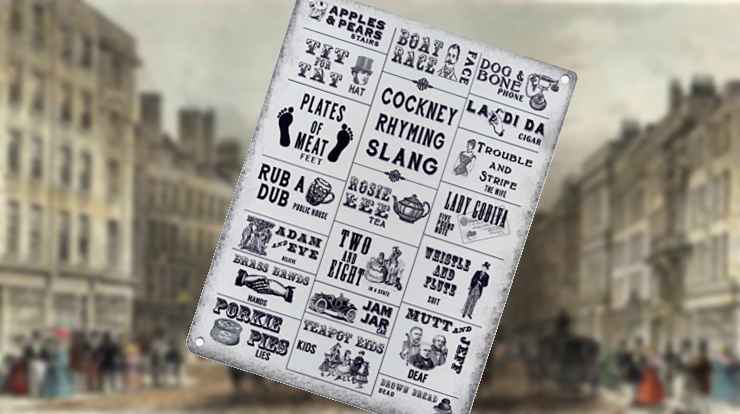 If you’ve ever wondered where phrases like “use your loaf” or “blowing a raspberry” or “what a berk” come from, the answer is Cockney rhyming slang.

The word “cockney” itself has interesting origins. In the 1360s it meant “a small, misshapen egg”, but by the 1520s it was a pejorative term for referring to pampered city-dwellers. By 1617, its focus had been narrowed to a specific area in the East End of London: “… all within the sound of Bow Bells, are in reproach called Cockneys.” (Incidentally, Bow Bells, the bells of St Mary-le-Bow church in Cheapside, also feature in the nursery rhyme Oranges and Lemons – “I do not know says the Great Bell of Bow”.)

How Cockney rhyming slang came about is unclear, although legend has it that it was a secret language developed to confuse non-locals, especially those of the … ahem … policing variety. It seems to have emerged around the 1840s, not – perhaps coincidentally – long after the establishment of London’s Metropolitan Police Force in 1829.

The slang itself revolves around replacing a common word with a phrase, the last word of which rhymes with the original word. So “stairs” can be replaced with the phrase “apples and pears” and the whole thing shortened. Instead of saying, “He fell down the stairs” you might say, “He fell down the apples” – which you have to admit would be incomprehensible to an outsider.

Where it gets particularly interesting is where it starts to get ruder – or maybe that’s just me! “Raspberry” is short for “raspberry tart” which means “fart”. So “blowing a raspberry” is literally “blowing a fart” – the noise you make when you do so. And as for calling someone a “berk”, that’s a shortened form of the phrase “Berkshire Hunt”, meaning “cunt”.

But wait, as they say, there’s more!

The rude bits are only a small part of the argot, of course. Wiktionary has a lot more Cockney rhymes, there’s a Top 100 here, and The Guardian has a comprehensive list too. While you’re looking at that lot, I’m going to put on my daisies, head up the, and have a nice Ruby. See ya!