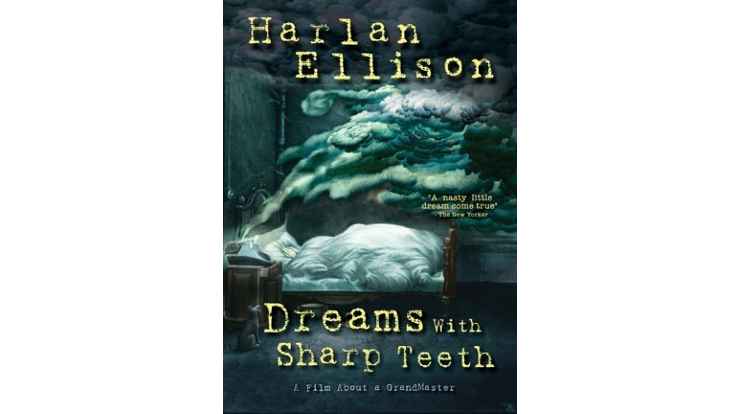 I have a writing exercise for you. I’d like you to produce a short story using the premise “The 102-year old pregnant corpse”. It’s currently 1 p.m. and I’d like a completed story by close of business today, please. Oh, there’s one more thing. You’ll be writing it in front window of a bookstore.

And that’s precisely what Harlan Ellison did in the window of the Dangerous Visions bookstore in California in 1998. The premise was suggested by Chris Carter, creator of The X-Files, and Ellison completed the story – called “Objects of Desire in the Mirror Are Closer Than They Appear”. Not only did it feature a pregnant corpse, but three suspects as well.

By that time Ellison had been writing for more than 40 years – and writing in store windows since the 1970s. In 1981, given the subject, “August afternoon a person walking along a rocky beach in Maine picks up a pair of broken sunglasses” scribbled on the back of an envelope and pressed to the window of a Fifth Avenue bookstore, Ellison wrote “The Night of Black Glass” over a period of five hours. Quizzed why he didn’t mind working like that, he told NBC:

Well when I write a story, I get into a story and the world that I’m creating is more real than the world around me.

And why so publicly?

I do it because I think particularly in this country people are so distanced from literature, the way it’s taught in schools, that they think that people who write are magicians on a mountaintop somewhere. And I think that’s one of the reasons why there’s so much illiteracy in this country. So by doing it in public, I show people it’s a job of work like being a plumber or and electrician.

Ellison, who died a couple of weeks ago aged 84, was a fierce champion of writers rights. In 1980, he sued ABC and Paramount Pictures claiming the idea for their TV series Future Cop was based on a short story he co-wrote with Ben Bova. They won a US$337,000 judgement. He also sued the makers of The Terminator for plagiarizing a TV script he’d written 20 years earlier. The production company settled out of court for an undisclosed sum and added a credit to the film acknowledging Ellison.

Here he is in full flight in Erik Nelson’s 2008 documentary Dreams With Sharp Teeth insisting writers get paid:

They always want the writer to work for nothing, and the problem is that there’s so god damn many writers who have no idea that they’re supposed to be paid every time they do something, they do it for nothing! [2:02]

I get so angry about this because you’re undercut by all the amateurs. The amateurs make it tough for the professional. [2:32]