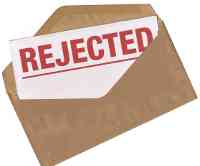 Rejection slips are part of a writer’s landscape. All authors get them at one time or another, and they usually reflect the opinion of one particular reader — often an over-worked junior employee — on one particular day. You should never take them too seriously. Fortunately, all of the following authors persevered. If they hadn’t we may never have heard of them — or their best-selling books.

Can you identify who, and in some cases, what book, got rejected? (Answers below, in blocks of five.)

1. This author finally landed a book deal after five years of continual rejections. Total sales of her books now exceed $2 billion. Only William Shakespeare has sold more books, and he had a 400-year head start.

2. The author’s agent received 12 rejections in a row. The 13th took it, but only after eight-year-old daughter of the company’s chairman asked for the rest after reading the first chapter. When submitting the second book, the author was told to get a proper job as there was no money in writing for children.

3. After selling only 800 copies on its first release, the author sought a more sympathetic publisher and subsequently sold 75 million copies of this book.

4. “I recommend that it be buried under a stone for a thousand years.” This controversial book was first published in France, to great acclaim. The English-speaking publishers who originally turned it down (one of whom is quoted above) went on to sell 50 million copies of it.

5. After 38 rejections, this author’s book was finally picked up and went on to sell 30 million copies as well as becoming an iconic film starring Vivien Leigh and Clark Gable.

6. “Too different from other juveniles on the market to warrant its selling.” This was one of the many rejection letters received by this author, but the doctor had the last laugh. He’s now the 9th best-selling fiction author of all time.

7. “The girl doesn’t, it seems to me, have a special perception or feeling which would lift that book above the ‘curiosity’ level.” One of 15 rejections before this book, originally titled “Het Achterhuis” and published in Dutch, found an English publisher – and sold 25 million copies.

8. “Nobody will want to read a book about a seagull.” 44 million people apparently did.

9. “We feel that we don’t know the central character well enough.” So the author tries a rewrite and the book sells 65 million copies, going on to become an American classic.

10. After years of rejections, this fantasy writer’s book ends up being translated into 47 languages and selling over 100 million copies.

11. One of this thriller writer’s rejections read: “It is so badly written.” Even so, the book went on to sell over 80 million copies.

12. Rejected so many times, the author gave up and self-published 250 copies of her book. It’s sold 45 million copies to date.

13. “Our united opinion is entirely against the book. It is very long, and rather old-fashioned.” One of a number of rejections for this classic. It was finally published with a print run of 3,000 copies, but only 50 of them sold during the author’s lifetime.

14. Published by a small San Francisco publisher after being rejected by 25 literary agents, the book is translated into more than 30 languages, adapted for a movie and sells 7 million copies.

15. “I haven’t the foggiest idea about what the man is trying to say. Apparently the author intends it to be funny.” Legend has it that part of this novel’s name came about after 21 other publishers had rejected it.