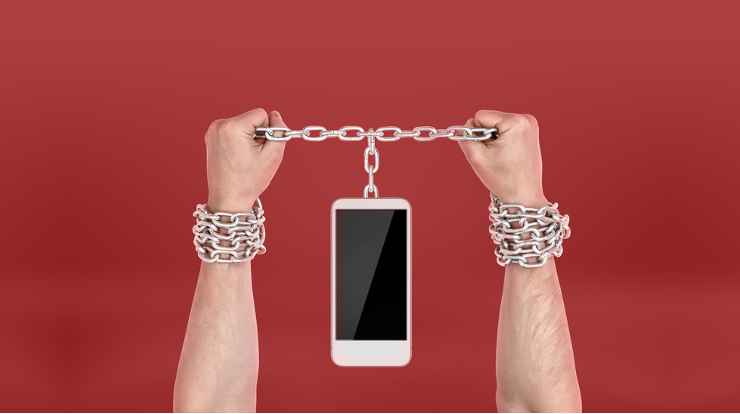 The first three questions in the Am I In An Abusive Relationship questionnaire take on a whole new meaning if you replace the word “partner” with the word “phone”:

This eerie convergence was pointed out by tech writer and keynote speaker Maria Farrell in a feature on The Conversationalist last week.

A couple of weeks ago, I gave a talk in Austria on smartphones and cybersecurity.

“Put up your hand if you like or maybe even love your smartphone,” I asked the audience of policymakers, industrialists and students.

Nearly every hand in the room shot up.

“Now, please put up your hand if you trust your smartphone.”

One young guy at the back put his hand in the air, then faltered as it became obvious he was alone. I thanked him for his honesty and paused before saying,“We love our phones, but we do not trust them. And love without trust is the definition of an abusive relationship.”

Walk down any city street and you’ll see peoples’ love affair with their phones. It’s hard (quite literally) not to bump into them. Artist Eric Picksergill has even created a disturbing series of photographs of what we look like with our phones removed.

Ten years ago, most people would have laughed at the idea that they carry around a device that tracks their movements 24/7 and monitors virtually everything they do. Now, they pay hundreds or even thousand of dollars for the privilege.

[Our phones] serve several masters, the least of whom is us. They constantly collect data about us that is not strictly necessary to do their job. They send data to the phone company, to the manufacturer, to the operating system owner, to the app platform, and to all the apps we use. And then those companies sell or rent that data to thousands of other companies we will never see. Our phones lie to us about what they are doing, they conceal their true intentions, they monitor and manipulate our emotions, social interaction and even our movements. We tell ourselves ‘it’s okay, I chose this’ when we know it really, really isn’t okay, and we can’t conceive of a way out, or even of a world in which our most intimate device isn’t also a spy.

Still not convinced? Consider this:

Farrell’s feature is well worth a read. She maps out the problem, some possible solutions, and concludes with this:

Seeing that our relationship with our smartphones is not healthy and not right is the first step. Understanding that we are not individually at fault for it is the next. Abusive relationships depend on mystification, “the process of explaining away what might otherwise be evident.” … It’s not for us to tweak who we are, but for our phones to radically change so they are worthy of our love and trust.

Meanwhile, over at Wired, a piece about new surveillance techniques shows how we may never be anonymous again. If you’re bothered about facial recognition, brace yourself for what’s coming.

Gait recognition analyses thousands of data points about peoples’ movements, from their length of stride to the angle of their arms. One company already has a patent on it, and it’s currently on trial in China, “which frequently leads the field when it comes to finding new ways to monitor its people, whether they like it or not.” According to the South China Morning Post, the software “can identify a person from 50 metres away – even if they have their face covered or back to camera.” Claimed accuracy: 94%.

Floor sensors offer an even sneakier surveillance method. At the University of Manchester, they used a neural network to identify 24 distinct factors such as stride cadence and heel-to-toe time, with a claimed accuracy of 99%.

Heartbeat and breathing patterns are apparently as unique as fingerprints, and both can now be monitored by lasers using what’s called doppler vibrometry. It’s still in its infancy, but the Pentagon are currently developing the system. Meanwhile, a Canadian company called Nymi are trialling a wristwatch-like pulse sensor as an ID system.

The mere presence of Wi-Fi signals can be used to track people behind closed doors, according to researchers at the University of California. In a paper titled Adversarial WiFi Sensing using a Single Smartphone, they reckon, “With more than two Wi-Fi devices in a regular room, our at-tack can detect more than 99% of user presence and movement in each room tested.”

It doesn’t stop there. There’s work on tracking your microbial cells (apparently we shed 36 million every hour), following your scent (“odour biometrics”), and even bum detection – I kid you not! Japanese researchers placed 360 sensors in a car seat to measure the unique sharp of each users butt and reckon it’s a 98% accurate as an anti-theft device.

Welcome to the surveillance society. You’ll never be anonymous again.

This column also appears on TechWatch.