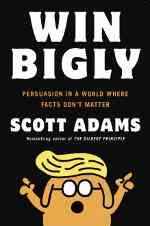 The basic premise of Scott Adams latest book, written during and finished after the 2016 election that saw Donald J Trump elected President of the United States, is easy to test. He gives us his argument in the introduction:

“Trump is what I call a Master Persuader. That means he has weapons-grade persuasion skills. Based on my background in that field, I recognized his talents early. And after watching him in action during the election, I have to say that Trump is the most persuasive human I have ever observed.”

(the author’s capitals and bolding)

Adams – best known for his Dilbert cartoon strip – predicted that Trump would “cruise to victory in the biggest, hugest landslide the American electorate has ever handed any candidate.”

Did he? Let’s look at the evidence.

In actual fact, in the league table of 49 presidential elections ordered by the percentage of popular vote, Trump is 3rd from bottom with a negative majority of -2.10%.

Of the 60.2% of Americans who voted in 2016, only 46% voted for Trump — which means only around a quarter of illegible voters were persuaded by the Master Persuader.

Of course, the popular vote doesn’t determine the outcome of a US presidential election. That’s done through their Electoral College, and there Trump did win the nomination, getting 56.5% of the delegates’ votes. But even that wasn’t a “bigly” win, placing him 39th out of 49 presidential elections and nowhere near the +90%s of the likes of Roosevelt, Reagan, Lincoln and Nixon.

Perhaps, given a year in power and all the kudos granted to a sitting US president, Trump would use his “weapons-grade persuasion skills” to bring the public round …

Apparently not. According to the latest Gallup polls, Donald Trump’s presidential job approval rating is at 37%. By way of comparison with other elected presidents in the second January of their term, the next lowest was Ronald Reagan (in Jan 1982) at 48%, and Barack Obama (in Jan 2010) at 49%, while the highest was George W Bush (Jan 2002) with an approval rating of 84%.

So by purely empirical tests, Donald Trump is not a master persuader!

Still, Adams argues that failing such tests proves nothing.

“Facts don’t matter. What matters is how you feel. And when you watch Trump and Pence fight and scratch to keep jobs in this country, it changes how you will feel about them for their entire term.”

Except it seems that 63% of Americans have yet to feel the love.

Adams’ previous book, How to Fail at Almost Everything and Still Win Big: Kind of the Story of My Life (2013), was an entertaining introduction to both Adams himself and his theories about persuasion, goal setting and why we do the things we do. Win Bigly is the opposite. A hodgepodge of self-congratulation and past blogs that appears to have been thrown together to satisfy a publishing contract.

Again and again, Adams tells us he’s a trained hypnotist – though when it finally comes to the details, this “training” seems less than impressive:

“I signed up for an evening class at the Clement School of Hypnosis. (It no longer exists.) And by “school” I mean there were about ten students learning from one professional hypnotist. If I recall, we met twice a week for about ten weeks, or something along those lines.”

Again and again, Adams reminds us about “confirmation bias” – the tendency to pick out facts that match our point of view – while seeming blind to his own. Although he claims to have no political persuasion, favour no particular party, not even to vote, yet Win Bigly comes off as a paean to a glorious leader the like of which you might expect from an acolyte of Kim Jong-un. Adams even attempts to put a positive spin on the notorious Access Hollywood “Pussygate” tape:

“Part of what protected Trump from that scandal is that some form of bad-boy sexual behaviour was already baked into what we assumed about him. He never presented himself as an angel.”

The picture Adams presents of Trump is wildly at odds with that presented by Michael Wolff in Fire and Fury: Inside the Trump Whitehouse. Adams image is of a master persuader restlessly pacing about in his Lair of Persuasion, working tirelessly on ingenious schemes to Make America Great Again. Wolff portrays Trump as an arrogant, egotistical, nepotistic, childish, and downright nasty character who never expected to win the election in the first place. (He just did it for the publicity.) So does that mean Trump really lost bigly?

Win Bigly opens with an unusual disclaimer from its publisher. Right after the copyright notice, you’ll find this:

Penguin is committed to publishing works of quality and integrity. In that spirit, we are proud to offer this book to our readers; however, the story, the experiences, and the words are the author’s alone.

Wolff’s controversial book offers no such a distancing disclaimer.

It seems Adams has lost bigly too:

“… my writing about Trump had cost me half of my friends. My lucrative speaking career had dropped to zero, and I didn’t expect any new Dilbert licensing deals. I had become toxic for any kind of mixed crowd. But I was okay with my situation because I expected to be right in my prediction that Trump would win it all. Winning fixes most problems.”

In a September 2016 interview, Adams told The Daily Beast, “The moment you join a group [or party], you start to identify your identity with the group’s identity, and then you merge, and the group’s opinion starts to become your own—and then you lose all credibility.”

Prophetic words. A pity he didn’t listen to himself.

If you’re a fan of the Dilbert comic strip, you’ll like the “Trumpbert” cartoon on the cover, but that’s about as good as Win Bigly gets. If you’re looking for a engaging, informative and Trump-free book on persuasion, I suggest Robert Cialdini’s Influence: The Psychology of Persuasion instead.