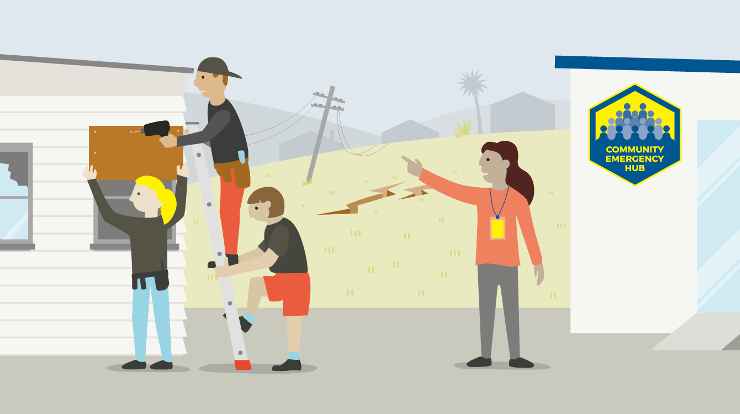 A couple of years ago, I was heading up Kent Terrace towards the Basin when I spotted a problem on Canal Reserve – that strip of land that separates Kent and Cambridge Terraces. Someone had fallen near the intersection of Elizabeth Street and needed help. I hurried across to see if there was anything I could do.

According to a motorist just stepping out of his parked car, an elderly man heading towards him on the footpath seemed to suffer a fit then “went straight over backwards”. The man was unconscious and still fitting. I dusted off my ancient first aid training, checked his breathing, got him into the recovery position and supported his head with my balled-up jacket. The fits eased but he remained unconscious.

Several other people arrived. A blanket appeared from a nearby business. Someone called 111, and I kept an eye on the patient until the ambulance arrived. It did so smartly, and the still unconscious man was whisked away, hopefully to a full recovery.

The reason I mention this is because of what I thought afterwards: What if this incident had occurred in the immediate aftermath of a serious earthquake?

Imagine the scene: emergency services are overloaded, the roads are full of debris and the cellphone network’s down. What would do with an unconscious person with a head wound who is clearly in need of prompt medical attention?

Back in the old days, I’d have known exactly where to go to find a stretcher to help transport the victim to medical care. Back in the old days, there was Civil Defence container in the grounds of Clyde Quay School, just a few hundred metres up the road in Elizabeth Street. But that’s long gone, plundered by what’s known as WREMO – the Wellington Region Emergency Management Office – who apparently insisted all such supplies be centralised. Quite where they are now, I don’t know. I just hope it’s not somewhere in the CBD. (Anyone see Featherston Street after the 2016 quake?) Clearly, no one in WREMO has heard the term “single point of failure”.

But it doesn’t stop them blowing their own trumpet. Several times this week I’ve encountered a paid ad on Facebook from them. You might have done so too:

So I did what they suggested. I took a look at the guide for my local emergency centre, the Mt Victoria and Oriental Bay Community Emergency Hub Guide.

Page 4 is supposed to contain a Facility Map. That’s what the page is headed, but all it contains is this message:

Clyde Quay School
Under discussion – A map of the venue is still to be sourced.

Locate keys
The location of the lockbox is marked on the Facility Map in this guide.

And that’s. Fallen at the first hurdle. Where is this mysterious lockbox?
‘It’s marked on the map.’
‘There is no map.’
‘Oh, no, we’re still discussing that …’
The document detailing this useless information is dated November 2017.

When I noted this omission on Facebook, a friend in Hataitai responded saying she’d found the same thing in the instructions for Hataitai North.

So I conducted a quick survey. There are 37 Emergency Hubs in Wellington City. None of the dozen or more I looked at have location maps to enable recovery of the keys to access the damn things. None! From Seatoun to Crofton Downs, Worser Bay to Churton Park, they all bear the same legend: Under discussion. Even the most recently updated one. (Grenada Village, December 2018.)

Still, at least most of them give you a clue where to start your post-disaster treasure hunt: Brooklyn School or the Karori Recreation Centre, for example. Miramar and Aro Valley residents aren’t so lucky. All the latter get is:

Under discussion – A map of the venue is still to be sourced.

… not even a hint of where to begin looking.

WREMO may be surprised to learn that natural disasters don’t keep business hours. The 2016 Kaikoura quake hit at two minutes past midnight. Imagine if it had been an 8.8 instead of a 7.8 – which is to say, ten times stronger*. Imagine the fun you could have playing Hunt the Hub by torchlight in what’s left of Aro Valley!

What’s in the Hubs anyway?

Bugger all, it seems. According to Page 3:

The Hub has a basic start-up kit consisting of an AM/FM radio, maps and a Civil Defence VHF radio that allows communication with the wider official response if phone lines are not working.

And that’s it! Not a blanket, not a stretcher, not even a first aid kit, apparently.

The WREMO message is very clear. In a natural disaster, it’s every man (and woman) for themselves!