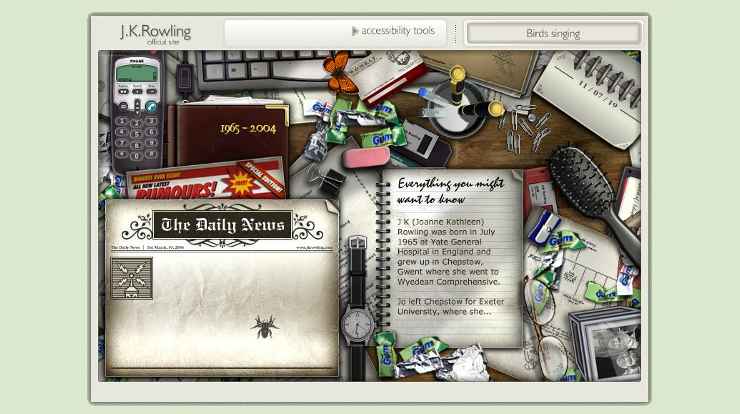 Until very recently, JKRowling.com was a list of links to my publishers – boring, I think you’ll agree. So I thought I’d liven it up a little.

And liven it up, she did. Beginning on 25 December 2005 she kept an occasional diary. Here’s a snippet from New Year’s Writing Resolutions, dated 5 January 2006. It comes right after “1. Muck out my study” and “2. Don’t lose any more notebooks …”

3. Be ruthless about protecting writing days, ie, do not cave in to endless requests to have ‘essential’ and ‘long overdue’ meetings on those days. The funny thing is that, although writing has been my actual job for several years now, I still seem to have to fight for time in which to do it. Some people do not seem to grasp that I still have to sit down in peace and write the books, apparently believing that they pop up like mushrooms without my connivance. I must therefore guard the time allotted to writing as a Hungarian Horntail guards its firstborn egg.

4. Follow advice from critics on how to be a better writer.
I always try to act on constructive criticism. When I fail, I attempt to embrace my faults and call them my ‘style’.

(This posting, and her website of the time, are long gone. Or would be without the Wayback Machine (aka the Internet Archive). The banner image is a screen grab of her old website which, thanks to the Wayback Machine, you can still enjoy it in it’s full animated and audio glory here.)