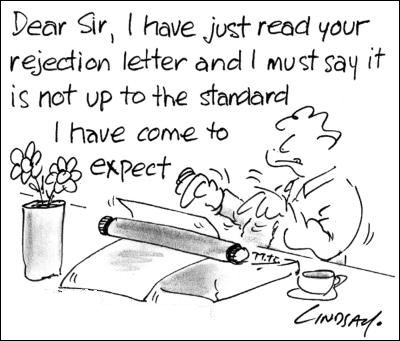 We’ve all had ’em. Even the greats. Schadenfreude perhaps, but it’s cheering to see just how wrong publishers can be at times …

Anais Nin
‘There is no commercial advantage in acquiring her, and, in my opinion, no artistic.’

Jack Kerouac
‘His frenetic and scrambled prose perfectly express the feverish travels of the Beat Generation. But is that enough? I don’t think so.’

Lady Chatterley’s Lover by D H Lawrence
‘for your own sake do not publish this book.’

Lord of the Flies by William Golding
‘an absurd and uninteresting fantasy which was rubbish and dull.’

Watership Down by Richard Adams
‘older children wouldn’t like it because its language was too difficult.’

On Sylvia Plath
‘There certainly isn’t enough genuine talent for us to take notice.’

Crash by J G Ballard
‘The author of this book is beyond psychiatric help.’

The Deer Park by Norman Mailer
‘This will set publishing back 25 years.’

Gentlemen Prefer Blondes by Anita Loos
‘Do you realize, young woman, that you’re the first American writer ever to poke fun at sex.’

The Diary of Anne Frank
‘The girl doesn’t, it seems to me, have a special perception or feeling which would lift that book above the “curiosity” level.’

Lust for Life by Irving Stone
(which was rejected 16 times, but found a publisher and went on to sell about 25 million copies)
‘ A long, dull novel about an artist.’

Barchester Towers by Anthony Trollope
‘The grand defect of the work, I think, as a work of art is the low-mindedness and vulgarity of the chief actors. There is hardly a lady” or “gentleman” amongst them.’

Carrie by Stephen King
‘We are not interested in science fiction which deals with negative utopias. They do not sell.’

Catch – 22 by Joseph Heller
‘I haven’t really the foggiest idea about what the man is trying to say… Apparently the author intends it to be funny – possibly even satire – but it is really not funny on any intellectual level … From your long publishing experience you will know that it is less disastrous to turn down a work of genius than to turn down talented mediocrities.’

The Spy who Came in from the Cold by John le Carré
‘You’re welcome to le Carré – he hasn’t got any future.’

Lady Windermere’s Fan by Oscar Wilde
‘My dear sir,
I have read your manuscript. Oh, my dear sir.’

Lolita by Vladimir Nabokov
‘… overwhelmingly nauseating, even to an enlightened Freudian … the whole thing is an unsure cross between hideous reality and improbable fantasy. It often becomes a wild neurotic daydream … I recommend that it be buried under a stone for a thousand years.’