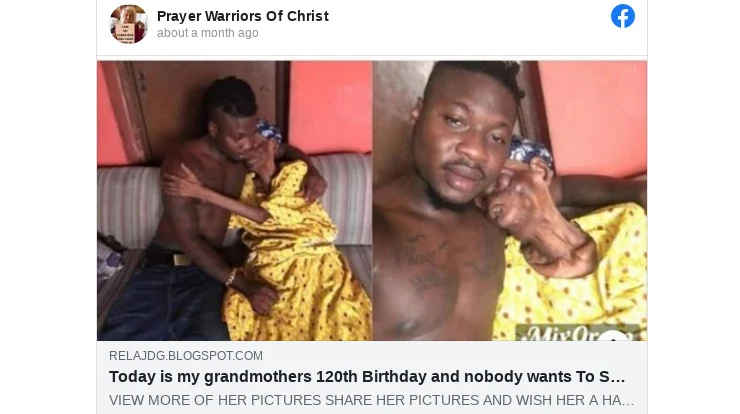 The basic setup uses a photograph to capture your attention and a caption to tug at your heartstrings. Something like the one above, for example.

The photos usually have to do with illness, physical deformities, disabilities, amputation, scars, tragedy and violence. The very young and very old are the most common subjects. The photos are usually real but they are typically old photos that have been circulating for years.

Is it enough to show a graphic photo with a sad story? No. For the icing on this cake there is often the common lie that it is someone’s birthday … and if that is not enough, there is also a guilt trip, that no one will share the post because of some embarrassing reason.

The practice is called share-baiting; manipulating people into sharing a post. But where’s the harm in wishing granny a happy birthday, or telling a maimed child she’s beautiful and then sharing it on your timeline?

These manipulation tactics are very precise. They are designed for a person with a kind and trusting heart, who is naive about internet scams. The kind of person who fails to see the deception in step one is more likely to fall for what is coming next.

It’s essentially a numbers game, as this post on Consumer Affairs points out:

Since Facebook’s algorithms place a high value on popularity (as measured by likes and shares), these highly liked and shared pages therefore have a much higher chance of appearing in people’s “Feeds” and being seen by other Facebook users.

The second step of the scam takes the viewer to some website off-Facebook. Often these are free blogs set up on blogspot.com or another service. Now the viewer is looking at the same photo that caught their attention back on Facebook. There is nothing new here. There is nothing to add to the story … but there is a caption promising to see more pictures, maybe even “watch a video” or to share.

Check that screen-grab above. If this were Facebook and you were to click on that picture, it would take you to the website named below the photographs. There you’ll find links to View More of Her Pictures and Share Her Pictures And Wish Her Happy Birthday, but clicking either will whisk you off into the depths of a website named (I kid you not) 5f6dmzflgqso.com. Still think it looks legit?

At those websites, people are encouraged to click to see more photos. The links they click do not take them to more photos, instead they are taken to fake “warning” pages where they are encouraged to download malicious programs they don’t need that could harm their computer. Scammers profit from the adware people install on their computers. The entire system start to finish works toward the goal of tricking someone to download a malicious program.

So think before you click “Like” to one of these messages. You may be helping propagate scams that target some of Facebook’s most trusting, and therefore vulnerable, users.