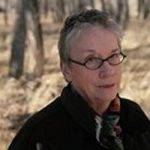 That novel, Postcards, won the PEN/Faulkner Award for Fiction, and her second, and best-known, novel
The Shipping News won a Pulitzer Prize for Fiction and a U.S. National Book Award.

In November this year (2017), she won the US National Book Foundation’s Medal for Distinguished Contribution to American Letters. Her full acceptance speech is here, but below are a couple of excerpts:

We don’t live in the best of all possible worlds. This is a Kafkaesque time. The television sparkles with images of despicable political louts and sexual harassment reports. We cannot look away from the pictures of furious elements, hurricanes and fires, from the repetitive crowd murders by gunmen burning with rage. We are made more anxious by flickering threats of nuclear war. We observe social media’s manipulation of a credulous population, a population dividing into bitter tribal cultures. We are living through a massive shift from representative democracy to something called viral direct democracy, now cascading over us in a garbage-laden tsunami of raw data. Everything is situational, seesawing between gut-response “likes” or vicious confrontations.

To me the most distressing circumstance of the new order is the accelerating destruction of the natural world and the dreadful belief that only the human species has the inalienable right to life and God-given permission to take anything it wants from nature, whether mountaintops, wetlands or oil. The ferocious business of stripping the earth of its flora and fauna, of drowning the land in pesticides again may have brought us to a place where no technology can save us …

Yet somehow the old discredited values and longings persist. We still have tender feelings for such outmoded notions as truth, respect for others, personal honor, justice, equitable sharing. We still hope for a happy ending.