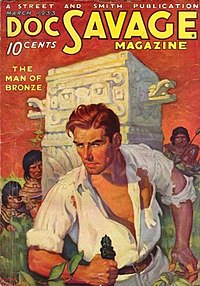 Lester Dent was the real name of the author almost all of the Doc Savage novels. (They appeared under the pen name Kenneth Robeson, a creation of his publisher.) There were 181 of them in total, published between 1933 and 1949. Dent wrote 159 of them. An average of ten a year for 16 years.

Dent died in 1959. His books are still in print, having sold well over 20 million copies, but these days he’s perhaps best known for The Lester Dent Pulp Paper Master Fiction Plot. In it … well, here’s the introduction in his own words:

“This is a formula, a master plot, for any 6,000 word pulp story. It has worked on adventure, detective, western and war-air. It tells exactly where to put everything. It shows definitely just what must happen in each successive thousand words.”

It’s an interesting and entertaining read in its own right, but I’ll let you explore that for yourself. Here’s Michael Moorcock’s
summary of the Dent method:

“First … split your six-thousand-word story up into four fifteen hundred word parts. Part one, hit your hero with a heap of trouble. Part two, double it. Part three, put him in so much trouble there’s no way he could ever possibly get out of it. Then … you must never have a revelation of something that wasn’t already established; so, you couldn’t unmask a murderer who wasn’t a character established already. All your main characters have to be in the first third. All you main themes and everything else has to be established in the first third, developed in the second third, and resolved in the last third.”

You can check out Dent’s first Doc Savage, The Man of Bronze, in a variety formats on Faded Page, “an archive of eBooks that are provided completely free to everyone.” Just click here.